The supply of homes on the UK market fell at its sharpest rate to date and buyer demand hit an eight-year low as Brexit was confirmed, surveyors say.

House prices are expected to fall across the UK in the next three months, the Royal Institution of Chartered Surveyors (Rics) survey suggested. The dip in prices is only expected to persist over the next year in London and East Anglia, surveyors predicted. This is the first significant housing survey judging the impact of Brexit.

In its June survey, it said surveyors across the whole of the UK were generally expecting prices to fall in the coming three months, with 27% more surveyors expecting to see prices decrease rather than rise in the near term. That will be welcomed by potential first-time buyers but met with disappointment by property investors and many homeowners.

The report, based on data collected after the EU referendum result, found that a net balance of 45% more surveyors saw a fall rather than an increase in homes being put on the market during June. This is the sharpest fall that the institution has recorded since it started gauging opinion on it in 1998. Supply had been falling in recent months, ahead of the referendum. A balance of 36% of surveyors reported new buyer inquiries falling rather than increasing, the most negative reading since mid-2008.

Simon Rubinsohn, Rics chief economist, said: "Big events such as elections typically do unsettle markets, so it is no surprise that the EU referendum has been associated with a downturn in activity. "However, even without the build-up to the vote and subsequent decision in favour of Brexit, it is likely that the housing numbers would have slowed during the second quarter of the year.

"Rics data does suggest that the dip in activity will persist over the coming months, but the critical influence looking further ahead is how the economy performs in the wake of the uncertainty triggered by the vote to leave." 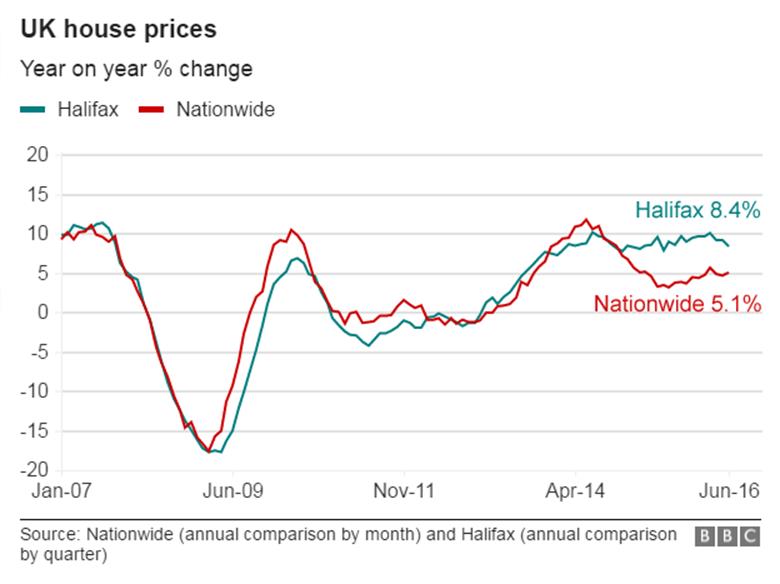 A report by the Bank of England found that lenders were expecting demand for mortgages to fall following the UK's vote to leave the EU. Yet the Council of Mortgage Lenders suggested that the effect of the referendum result on the housing market would not be immediately clear. The decision by the Bank of England on whether to alter the Bank rate, to be announced later, is likely to affect the cost of mortgages and, potentially, demand for these home loans. At present, the Bank rate - a significant factor in setting the cost of borrowing - is at a record low of 0.5%.