America's central bank has raised it benchmark interest rate for only the second time in 10 years.

When the Fed changes policy on rates, it ripples across the globe. So, how does it affect people in the UK?

If you've got a mortgage...

The short answer is not a lot.

There might have been a time when a rate rise in the US could have added to pressure here to raise rates.

But the Bank of England is in a very different place now.

It cut interest rates in the wake of the vote to leave the European Union - and it is expecting growth to slow next year.

Policy makers are unlikely to be swayed by anything the Federal Reserve does at this meeting.

UK interest rates are not expected to rise in 2017, and indeed are more likely to be cut further from the current historic low of 0.25%, according to Anna Stupnytska, global economist at Fidelity Investment Management.

But in the US, the Fed now thinks that there could be three rises next year, up from the two that were predicted in September. That's because of the expansionary policies expected to be introduced by President-elect Donald Trump.

So, in the UK you might not be immediately affected, but for those of you looking at longer term mortgages - such as a 10-year fixed rate - these are influenced not just by the UK's base rate, but also by the global bond market, which is already seeing yields rise.

And if US rates continue to increase, that may continue to push bond yields higher, in turn pushing up some mortgage rates. 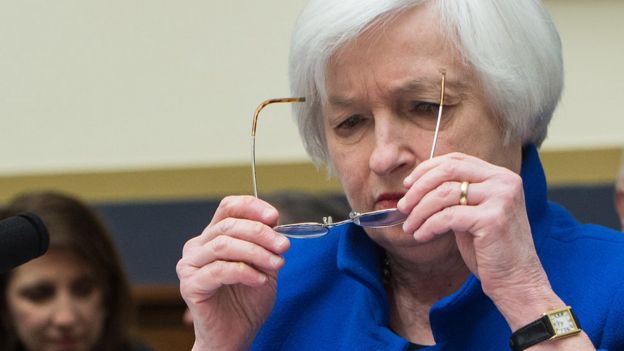 Will it affect the pound?

Traditionally a rate rise means that an investor can get a better return on their investment and that usually benefits the currency, so the dollar might rise in response.

However, this rate rise has been so well signalled that investors have effectively "priced it in", in other words they are already acting on the assumption that it will happen.

The pound has already fallen significantly against the dollar since the referendum (about 14%) and it's likely that EU exit negotiations will have a major influence.

But Ms Stupnytska points out that if Mr Trump does have a positive effect on growth, and the US economy picks up next year while the UK's deteriorates, then that too could exacerbate weakness in the pound.

For the holidaymaker it's not such a good thing as it makes your trip more expensive, but for a UK exporter it is a positive influence as it makes their goods cheaper abroad. 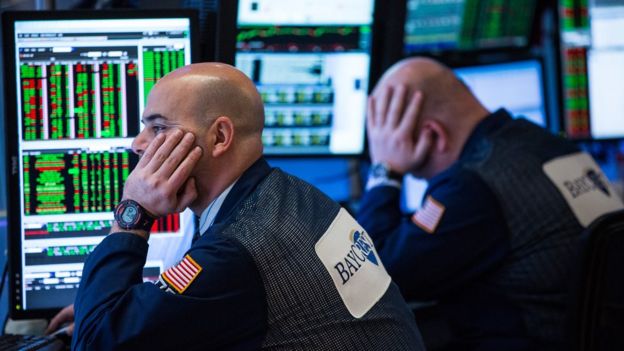 Well, as mentioned earlier, investors have been pretty much working on the assumption that the rate rise was coming.

Initial reaction from US share markets was muted following the Fed's decision.

Meanwhile, the dollar strengthened, rising slightly against major currencies including the euro, sterling and yen.

That could boost shares in companies which generate their profits in the US currency - and there are many on the London stock market (chiefly miners, pharmaceuticals and oil companies).

Again, a weaker pound helps exporters so they may benefit.

On the flipside, utility, healthcare and consumer staple companies could see their shares underperform compared to others, says Ms Stupnytska.

She points out that they are often referred to as "bond proxies" because they are high dividend payers and offer an alternative income investment to bonds.

But with yields rising in bond markets, the relative attraction of equity bond proxies has diminished.

What about the rest of the world?

For countries with a lot of US debt in dollars, their repayments are going to be a bit more expensive.

"This rate rise has been so well trailed that the impact on emerging markets is likely to be limited," says Philip Shaw, economist at Investec.

Like everybody else they will want to know how many more rate rises to factor in next year, he says, and whether Mr Trump's stimulus promises lead to higher growth and if so how the US central bank reacts to that.

Ms Stupnytska says countries most sensitive to rising rates are Turkey, South Africa, Malaysia and Mexico, because a large amount of their debt is held by foreign investors and their economies are relatively weak.